Over time and intensified research, some things once thought to be useful for the betterment of human lives turn out to have certain adverse effects on human health conditions. One of such products which have been thought to be a breakthrough in the area of the construction industry is asbestos. Asbestos removal in calgary AB needs to be done by professionals only !

For decades, it has been the most sought construction material for its heat-resistant properties, durability, and strength. Still, later on, it was discovered to have toxic components that are hazardous and perilous to human health. It became a medical fact that asbestos may be classified as “cancerous” and may inflict severe adverse effects on those who got contact with or have a second-hand exposure to the asbestos. Since it is airborne, it is invisible to the human eye and can easily be ingested and pass through the person’s respiratory system.

Asbestos is a mineral fiber that can be unearthed or mined from the soil or rock, and recently the Toxic Substances Control Act (TSCA) identified six types of asbestos. Let us have a quick look at the different types of asbestos;

The Different Types of Asbestos 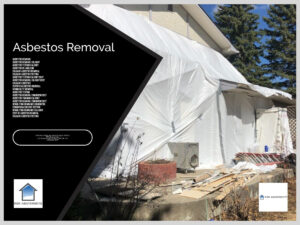 This type of asbestos is mainly used in tiles, pipe installation, cement products, and other heat-resistant products. It was being mined in Africa and was colloquially called the “brown asbestos” and labeled as the most hazardous asbestos family.

It is inhaled and penetrates the human body for its microscopic particles are airborne. The alarming fact is that despite having a high level of toxicity, it was commonly used as a building material. This type of asbestos is being used or may be found in these products, such as in chemical insulation, electrical insulation, cement, gaskets, fire protection, insulation boards, roofing, plumbing insulation, tiles, and thermal insulation. With its long list of users and purposes, it is most likely that your home or building has used this type of asbestos.

Tremolite is a material component that can be found in Chrysotile, and it may have been used In manufacturing commercial products. Still, it is usually being used with other materials, for it cannot be used alone.

This type of asbestos may also be present in some minerals like talc and as well as vermiculite. Its color ranges from milky white to a dark green hue. It can easily be ingested and inhaled, for it is tiny sharp fibers that are airborne. Tremolite asbestos should cause an alarm for it is cancer-causing illnesses and diseases. It was being used in construction materials like sealants, paints, roofing, insulation, and plumbing materials.

It has been used and found in some commonly used products like brake lining, asphalt, brake pads, cement, disk pads, plastics, gaskets, roofing materials, textiles, and rubber. With such a long list of products that used this type of asbestos, it is a confirmation that it is commonly used asbestos.

The toxic level of this type of asbestos is rather low; however, it may still inflict diseases to a person that had exposure to the material component of chrysotile. Despite the ongoing controversy among health professionals about the use of chrysotile still, there is ongoing mining of this type of asbestos in the countries of Canada, Italy, and as well as in Russia.

There may be a conflicting claim between the health professionals and the companies that are using chrysotile. The stand of the health industry is that any type of asbestos is regarded as a carcinogen and hazardous despite that it may have a low toxicity level. The glaring medical fact is that some cases of pleural mesothelioma are being linked to this type of asbestos.

This was not being accepted by industries using this type of asbestos, for they maintain that it is safe for it is only being used in non-friable products, and it is dense. It is also being considered encapsulated in cement or resin.

This may put you in red alert status for crocidolite asbestos is known to have a high level of toxicity and may be categorized as harmful to human health. It has distinguishing characteristics and oftentimes being referred to as the “blue asbestos,” and has the same heat-resistant properties as the rest of the types of asbestos. It is part of the amphibole family of asbestos and is regarded as highly hazardous. It was a medical fact that several illnesses and even deaths are related to crocidolite asbestos exposure.

Due to its less heat-resistant feature, it is not used for commercial products; however, it is being used in some products like tiles, insulation materials, and as well as cement. It has characteristic features of fine sharp fibers that can easily be inhaled and penetrate the person’s respiratory system.

It may be a relief that this type of asbestos is not being used commercially; however, it may contaminate other products. It has distinguishing colors of yellowish or brownish, and its mineral components are magnesium and iron. Same with another type of asbestos, it is airborne and easily finds its way to the respiratory system, for it can easily be ingested.

It is being regarded as one of the rare types of asbestos and is not found in any commercial products; however, it is found in cement and insulation materials.

Actinolite may not have been used commercially but still poses a threat to human health for being a contaminant. It has been described as unyielding and rough asbestos and can be easily inhaled when it is airborne. It has a sharp needle-like fiber, and its coloring is mostly dark and can easily penetrate the respiratory system of the human body.

Previously it is commonly used in insulation materials, paints, cement, drywall, and sealants. Actinolite asbestos also has other mineral components such as calcium, iron, magnesium, and silicon.

Asbestos was once hailed as a breakthrough and highly regarded, especially in constructing buildings; however, it is undeniable that it is causing several diseases, illnesses, and even deaths. The six types of asbestos are part of the two types of mineral family: the amphibole and the serpentine.

Regardless of which type of family that the asbestos is part of or its level of toxicity but it is still being considered hazardous to human health. There may be states that have already refrained or totally banned the use of asbestos, but there is still continuous mining and importation of asbestos.